In our previous edition of X-News, we announced that the Axelent Group is serving as the main sponsor for the JU Solar Team. A great deal has happened since then. The solar car has evolved from being a number of loose parts to a fully functional vehicle. 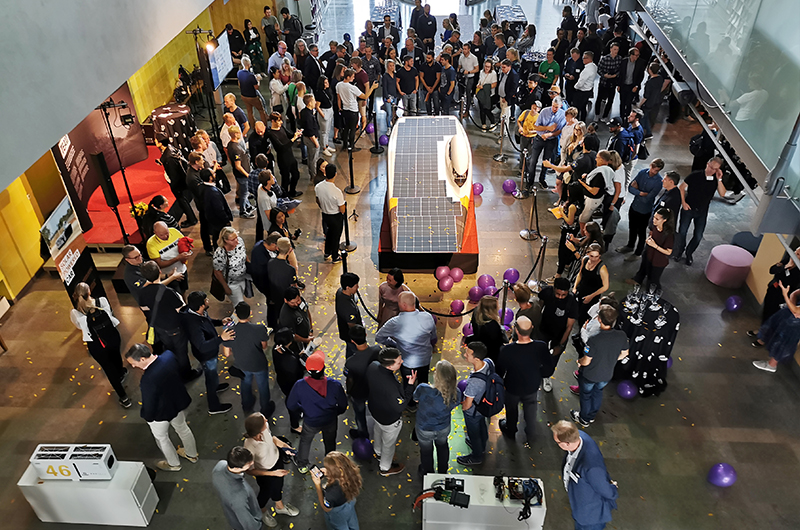 After endless hours of work, it was finally time for the JU Solar Team to unveil Axelent, this year’s solar car, for the world to behold. Crowds gathered in the foyer of the School of Education and Communication at Jönköping University to see the car that will cross Australia in October. After some mingling, everyone was welcomed by the compere for the evening, Matilda Ekman, who was part of the 2017 JU Solar Team. The largest sponsors then had the chance to take the stage and tell the audience about their partnership with the team.

Stefan Axelsson explained why the Axelent Group felt it was so right to agree to become the main sponsor for the JU Solar Team. He highlighted the importance of thinking about the future and that solar power is an interesting alternative. Renewable energy is nothing new for Axelent. For many years, the organisation’s own wind turbines have been supplying all the energy it uses. Axelsson also told the audience that the Axelent Group has employed several members of the 2017 JU Solar Team and that, as part of the sponsorship, they have been on hand to share their experience with this year’s team.

The Bridgestone World Solar Challenge finishes in the city of Adelaide, which is where Axelent Australia has its office. Stefan intends to take advantage of this fact. He will be waiting at the finish line and has promised that he and the Australian office will give the team a warm welcome after they’ve completed the race.
“I would like to thank the team for the opportunity to be your sponsor,” Stefan Axelsson said in closing. 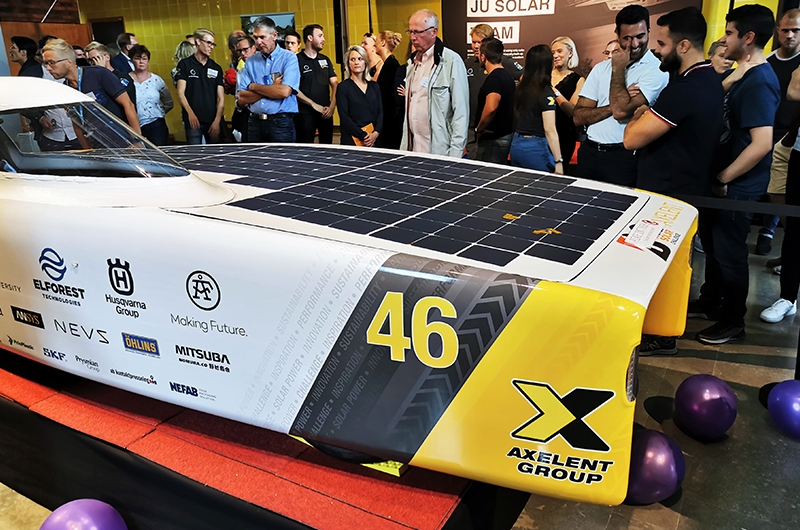 The event was well-organised and well-attended. JU Solar Team’s Marketing Manager LisaBeth Sundström was pleased with the evening.
“The unveiling of our new solar car Axelent went very smoothly and it felt amazing to present what we’ve been working so hard to achieve over the past twelve months. The actual planning of the event began back in April and now it’s wonderful to see everything fall into place four months later. As well as getting to know the drivers, the visitors also heard about the improvements we’ve made since the previous car,” says LisaBeth Sundström.

Kelvin Frank is one of the drivers and is looking forward to steering Axelent across Australia.
“It is a huge honour to have been selected to represent our team. The task carries a lot of responsibility, and the other drivers and I intend to do our very best to impress everyone with our solar car, into which we’ve put so many hours of work. Based on what I’ve heard about the other teams and their accomplishments in previous years, I think it’s going to be a really tough competition. It means we need to raise the bar this year, and I feel we’ve already done that with our solar car Axelent. I can hardly wait for the competition to start. We’ll soon be measuring ourselves against the other teams for the first time to find out who is best. We couldn’t be more ready than we are for this challenge,” says Kelvin Frank.

In his speech, Rishab Karan Mehta, the team manager of the JU Solar Team, proudly related that the team had managed to overcome all the difficulties that they had encountered while working on the solar car.
“It felt fantastic to finally have the car on the podium for all the world to see. It is hard to describe the feeling, but right there and then it was really worth all the effort. The other teams in the Bridgestone World Solar Challenge will need to watch out,” says an upbeat Rishab Karan Mehta.